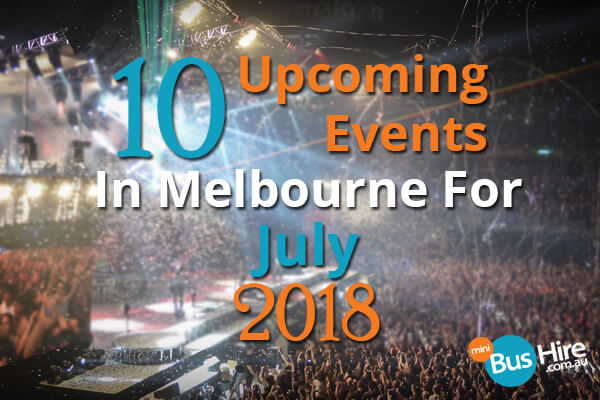 Throughout the year, Melbourne’s event calendar is filled with arts festivals, live music performances, exhibitions, theatre shows, and much more. The eventful city has a lot to offer, and one can easily attend these July events, by choosing minibus hire with driver in Melbourne.

With plenty of death-defying feats and a brand new show, the favourite circus is back in Australia, for season ending mid-July. The new show Precarious promises to be a stellar one, where you can expect acts like tippy ring, aerial rope, giant hoop and foot juggling, along with hula hoop and Chinese pole. The show will have a strong environmental message and social justice. It is going to be a relaxed performance for those who experience a communication or sensory disability.

The House of Bernarda Alba

One of the most awarded playwrights of all time brings the classic of Federico García Lorca to a scorching summer down under. It seems to be an odd pair with Patricia Cornelius, who is lauded for her weird skills to spin a sort of rough poetry from the dialect of the city streets. It was the idea of the director Leticia Cáceres to pair these two icons. Although both the writers lose something in rendition, the result is remarkably pleasing. Come along on the 4th of July to treat yourself with this retreat!

The Cumulus Up is hosting the City Cellar Door and Wine on Saturday the 7th of July. No need to venture out of the town to buy delectable wines at cellar door prices. The wines will be from a specific region of Victoria, with the final event showcasing the sparkling wines of the state. The team will be roasting an entire pig to make tasty rolls as a complement to wine tastings.

If there is one market that you should definitely attend this year, it has to be the Finders Keepers Market, scheduled to be held from 13th to 15th of July. This 3-day art and design extravaganza will incorporate a robust line-up of independent creatives. Also, not to forget about the food offerings at the market, as they draw a big crowd for an entertaining event.

With good food, delicious wine and exceptional music, it’s time to rejoice the most popular date in the Gallic Calendar. This year, the celebrations will be taking over the Meat Market in North Melbourne, to rejoice the best of French tradition, from the excellent wine and food to the Gallic nation’s art and film. On 14th and 15th of July, a part of the market will be turned into French marketplace filled with vendors showcasing the best pastries, crepes and French cheeses. Look out for sweet treats from Chooh La La, Ganache and Pop-Up Crepes, pastries from Gontran Cherrier and Choukette. Vendors will also be peddling French-made goods, offering travel options for your next escape or French language lessons.

You Can’t Do That

The Art Melbourne Museum will be hosting an exhibition that celebrates the iconoclastic side of fashion. Fashion is an impulse for a change in society, and nothing can be more motivating that someone telling you ‘You Cant Do That’. This exhibition is in honour of 6 popular fashion figures in Australia, who were told the same, but they went against the odds and did it anyway. Andreja Pejić, Christopher Graf, Jenny Bannister, Lois Briggs, Prue Acton and Stella Dare used rejection to stimulate their creativity. The exhibition will have original clothes display from the designers, along with modern and historical catwalk footage.

Happening until 21st July, 2018, this is not going to be an ordinary bus tour. You will get to know about places and people that made the music scene of Melbourne, what we see today. It’s a collaboration between the Australian Music Vault and the Arts Centre Melbourne, which will take 22 people on a 4-hour journey of famous music spots, artists homes, rehearsal spaces, recording studios, laneways and music venues. The tour will be visiting hotspots such as Espy, Crystal Palace, Tote and the Palace. It also visits recording studios including Dogs in Space house, Bakehouse studios and mushroom records.

MoMA at NGV: 130 Years of Modern and Contemporary Art

This major exhibition organised by NGV international will be exhibiting over 200 seminal works from the Museum of Modern Art In New York. This is going to be one huge event, as the city will be transformed into a home of masterpieces by Mark Rothko, Vincent van Gogh, Jackson Pollocl, Pablo Picasso, Henri Matisse and Salvador Dali. The gallery needs little introduction, as it showcases an unmatched collection of 20th and 21st century art. You will be amazed with the diverse and extraordinary selection of works presented on display.

With cocktails, live performances and DJs, experience the wonderland exhibition of ACMI on the 27th of July, rejoicing Alice in Wonderland in all her forms, from original work of Lewis Carroll through to various stage and film adaptations and her representation in popular culture and music. A character from the book will be guiding you through the exhibition, with the journey descending through the tippy entrance and choosing a door that fits your size. It can be tough spend sufficient time interacting with exhibition, when you are surrounded by kids and school groups on holidays.

This 2-day event from the 28th to 29th of July is an opportunity to stickybeak into some of the most fascinating buildings in Melbourne. It is a chance to reflect on the impact that the design has created in city’s evolution. It also gives a future insight into what city may become, considering the significance of its heritage and how to protect it. Some of the notable buildings open to public include the Melbourne Town Hall, the Melbourne City Baths, the Library At The Dock and the Council House 2. One can venture a little outside to explore amazing sites in the suburban region.