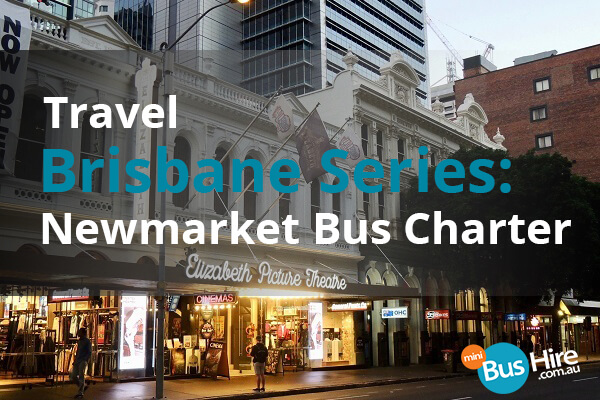 There are several suburbs spread across the city of Brisbane. You will get everything from the bustle of a downtown to the relaxed village vibes, as you set out to discover the charm of Brisbane’s suburban region. At Minibushire.com.au, we prioritize customer satisfaction by offering convenience and affordability with our reliable services. This is certainly the best option you have for Newmarket bus charter, if you are travelling in a group.

Newmarket is a beautiful suburb in Brisbane located to the north-west of the city. It is surrounded by the suburbs of Wilston to the east, Kelvin Grove to the south, Ashgrove to the west and Alderley to the north. It is primarily a residential suburb with war homes, including many examples of Queenslander home style. Due to its distance from the city, it was initially known as “The Three Mile Scrub”. It has a number of heritage-listed sites including Wilston House, Newmarket State School and Newmarket Air Raid Shelter.

Located on the southern bank of the Brisbane River, this recreational precinct is a must visit for everyone. One of the most popular tourist attractions here is the South Bank Parklands. It is home to many cafes and restaurants, along with landmarks such as the Grand Arbour, Streets Beach, Nepal Peace Pagoda, the Wheel of Brisbane and the Queensland Conservatorium. Some of the most popular restaurants are located on Grey Street. And not to forget, the Brisbane Convention & Exhibition Centre is one of the topmost convention centres with as many as 44 event spaces.

Built in 1896 by Arthur Midson and designed by Alfred Barton Brady, the Victoria Bridge Abutment is a heritage-listed road bridge at Stanley Street. It was added to the National Register of Historic Places in 1992. It comprises a large stone podium with ashlar facing, and it is capped with downstream arch. The entry to footway was designed with a rusticated arch, combining both Egyptian and classical vocabularies. The Bridge connects South Brisbane near the Queensland Cultural Centre and the South Bank Parklands to Brisbane CBD at North Quay.

The Bank Street Reserve straddles the Alderley and Newmarket with a 37 hectare of lush parkland, where once field of gardens thrived. There are a couple of playgrounds at the base, along with a grove of primitive blue quandongs and beautiful parks. Dating back to the end of the Jurassic period, the blue quandong is the first flowering plants emerged. There are entrances from Banks St and View St, with a couple of kilometres of bush tracks traversing the hill.

This heritage-listed Windmill in Observatory Park next to Wickham Park was built by convict labour in 1820s and is the oldest surviving building in the state. It is also known as the Windmill Tower and Brisbane Observatory, which was added to the National Register of Historic Places in 1992. It has accommodated a wide array of uses and was initially constructed to process the corn and wheat crops of the Moreton Bay penal settlement. In 1845, the meal ceased grinding operation and the treadmill was removed. Later it was utilized as a signal station to exchange news between the town and the Brisbane River. In 1861, substantial renovations were made, including the installation of a time ball to assist in regulating watches and clocks.

Also known by the name of Brisbane Central Wharves, the Howard Smith Wharves is a heritage-listed destination spread across an area of 3.5 hectares. It is a historically and culturally significant place and one of the last undeveloped riverfront destinations in Brisbane. It is located on the northern banks, and the site’s boundary is formed by cliffs along the south-eastern, eastern and northern perimeter, which in turn is bounded by Moray Street and Bowen Terrace. The historic sites contain a series of buildings with surviving sections of wharfage along the waterfront.

This water highway for cyclists and pedestrians is the most scenic tract of Brisbane River, which was built to replace the first floating riverwalk of the city. It was constructed to replace the first floating riverwalk in Brisbane. The Riverwalk is 870m long happily divided into dedicated roadways for pedestrians and cyclists, with a 2.5 m path for pedestrians and 3.5 m path for cyclists. Riverview court is the entrance of the New Farm, and the Riverwalk ends at the Howard Smith Wharves to link to the riverside boardwalk. You won’t find much shelter along the way, so it’s better to leave early or late in the day.

Nestled in an outback location is an absolute hidden treasure, known by the name of Gallery B. It is specially designed like an Aladdin’s cave full of beautiful wares from silver cigarette lighters, bags and leather shoes. Occupying one corner is a small cafe, with a little balcony outside. You get a serving of premise-baked cakes such as chocolate mud or tiramisu, as well as apple tea or Turkish coffee.

Next to the balcony is a patio with communal table, from where you can witness expansive views out to the Paddington hills and the Taylor Ranges. Do not miss out on the views inside the shop as the diverse collection includes Turkish tea sets, Cuban cigars, Guess bags, handcrafted jewellery, vintage art deco lamps and figurines.

This transport museum has preserved a collection of trolleybuses and trams, most of which operated until 1969. Established in 1968, the museum was opened to public in 1980. It has a collection of 25 trams, and also a couple of single-deck trolley buses. Only one of the trams in the collection ran in the city of Sydney. Most of the trams are operated on a shortened length of demonstration track of 250 metres. A “Matchbox” or “California Combination” tram built in 1901 is the oldest operation tram in the world.

The best way to explore some of these attractions is to book Newmarket mini bus hire. Contact us today to find out more or fill in our quote form and discover the most competitive rates in town!