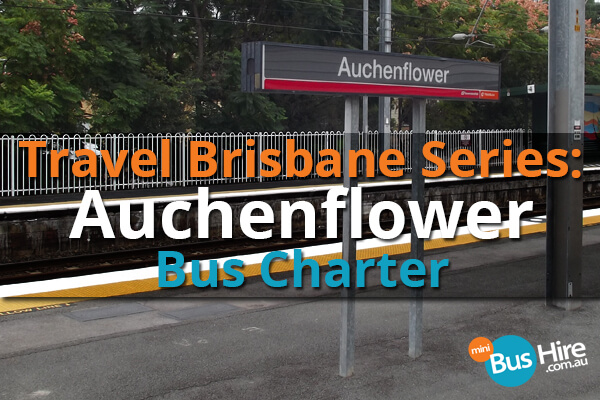 Booking minibus charter in Auchenflower is the most convenient way of exploring this beautiful inner suburb with friends or family. You can be rest assured of comfort and affordability, when looking to travel with us, as our licensed driver will take you to your preferred destinations in style!

Auchenflower is an inner western suburb in Brisbane, known for its sprawling flamboyant Queenslanders perched on sharp narrow streets, threading through lush hills. The area was initially populated by real estates, and Thomas McIlwraith circa named one of them ‘Auchenflower’ in 1880. The name of the suburb is Gaelic for ‘field of flowers’. Between 1900 and 1962, the area was served by trams running from Toowong along Milton Road. Following the disastrous tram depot fire in Paddington, the services were withdrawn. The suburb is now home to a spooky villa, quaint croquet club, chic bars and some great restaurants.  Some of the main attractions along this busy stretch include:

Having transformed from an old antique shop, the Cafe Auchenflower is a charming hangout place with a mouth-watering innovative menu and country vintage decor. You will find cushion bench and chairs outside with a panoramic view onto the fenced park, while fresh herbs and flowers surround the VJ walled room. The breakfast menu features dishes such as peanut butter pancakes with banana and salted caramel, eggs with truffled mushroom, crispy bacon and maple roast muesli. Don’t miss out on the organic BlackStar, hot chocolate by Koko Deluxe.

This rustic dining and wining spot is tucked neatly on the side street of Auchenflower. Vintage US southern state number plates and US bourbon posters adorn the brick walls and rough-hewn timber, with the blazing menu offering plates of hearty food straight out of Route 66. This is an ideal place to take a halt for a glass of beer coupled with a plate of delicious grilled chicken wings topped with BBQ sauce, point cut brisket and blue cheese dressing. Some of the key highlights include Crab and Smoked sausage Gumbo with bell peppers on rice, Chicory Smoked Pork Ribs in BBQ sauce and Lamb Shanks braised in pale ale beer vegetable broth. And then you have desserts like walnut brownie and chocolate with macadamia gelato.

This vibrant lifestyle and shopping precinct at the heart of the Brisbane City is undeniably the most successful pedestrian mall in Australia. It offers an unrivalled mix of international, national, as well as local flagship stores. Over 700 retailers are housed here, with Queens Plaza being a must visit. Other long-time favourites include The Myer Centre, MacArthur Central, Queen Adelaide Building, Broadway on the Mall and Wintergarden. It’s not just a shopping hotspot, but also the heart of the city.

Located at the corner of Melbourne Street, the Queensland Performing Arts Centre is a cultural venue that was designed in the mid-1970s by local architect Robin Gibson. The performing arts centre was opened in 1985 by the Duke of Kent. Every year, the venue hosts over 1000 performances across its outdoor spaces and 4 theatres. This highly versatile venue can accommodate a wide array of performances including modern and classical music concerts, comedy, opera, theatre, musicals and dance featuring national and international artists, companies, musicians, dancers and actors. In addition to that, the centre produces some of the most successful and innovative shows, as well as free outdoor programs.

Located in South Bank of Brisbane, the South Bank Parklands is on the transformed site of World Expo 88 of Brisbane, which was officially opened in June 1992. The parkland is connected to the city at the northern end by the Victoria Bridge and at the southern end to the Gardens Point by the goodwill Bridge. The parklands include a mixture of plazas, grassed areas and rainforest, as well as features like restaurants, the Wheel of Brisbane, the Nepal Peace Pagoda, the Courier Mail Piazza, the Grand Arbour, the Streets Beach and the riverfront promenade. It is also home to the Queensland Conservatorium. Large scale events and festivals are hosted at this important cultural precinct in Brisbane, with millions of annual visitors every year.

This elegant well-preserved relic from the early 20th century is an ideal spot to explore the joys of old-fashioned lawn games. Established in 1923, the club has a fascinating history. The land was bestowed by Lady McIlwraith to the Town of Toowong, only for recreational purposes. The origin of the club is still ambiguous, since all the records were flushed in 1974 floods, when the roof was submerged. Recently, it was known that until 1946, it was a “Women Only” Club, until men were allowed.

Tucked on a hill overlooking the river, Moorlands is possibly the most intriguing and notorious historical residence in Brisbane. It was in 1892 that the architecture was designed by architect Richard Gailey at the request of the famous Mayne family to replace the earlier family. The widow of butcher Patrick Mayne laid the foundation stone, and it is known that there was a time capsule underneath containing newspapers and the reason for construction of house. The site has been a subject of hearsay about the serious crimes of Patrick Mayne including alleged confession to the butchering and killing a man, and allowing another one to hang for the crime. Children from the neighbourhood have been forbidden to walk past the house, making sure it became an isolation tower for its residents including Patrick Mayne’s 4 children. One of them spent the last years of her life in the Sisters of Mercy.

Planning for a trip to Brisbane anytime soon? Do make sure to visit Auchenflower to explore this wonderful suburb in entirety, and don’t forget to avail the services of bus charter for a comfortable, convenient and reasonably priced ride. You can save money with us!